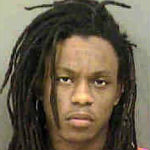 CHARLOTTE, N.C. — The Charlotte-Mecklenburg Police Department is investigating a homicide at the 1000 block of Coliseum Drive.

Police received a call for service about 8:45 a.m. in response to a fight.  When officers arrived they found a man suffering from gunshot wounds.  He was transported to Carolinas Medical Center where he was pronounced dead by medical personnel.

The victim has been identified as Kevin Crosson, 26.  His family has been notified of his death.

Police arrested Michael Stephon Lineberger, 20, for the murder of Crosson. They also charged him with firearm by felon.

Police said they think Lineberger and Crosson were involved in a domestic dispute that led to the shooting.

The investigation is ongoing and detectives ask anyone with information on the shooting to call Crime Stoppers at 704-334-1600.