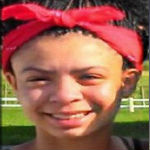 KANNAPOLIS, N.C. —Authorities in Kannapolis are looking for a 15-year-old girl who has been missing since earlier this month.

Burris is described as a 100-pound white female, five feet tall with black hair, brown eyes and a light complexion.

Anyone with information about Burris is asked to call the Kannapolis Police Department at 704-920-4000.