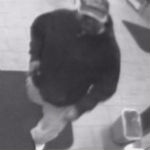 DENVER, N.C. — Deputies in Lincoln County are asking the public’s help in trying to identify a thief who robbed a Denver Walmart early Monday morning.

Officials said around 3 a.m. a store employee was walking back to the cash register after returning from break when she noticed a man crouched down near a register that is rarely used.

She told police that when she walked closer, the man was kneeling and pretending to look at the candy rack. That’s when she noticed the register door had been popped open.

She told deputies that’s when the man ran out of the store with a bag of money.

Several Walmart employees chased after him and were able to give police a description of the getaway car.

Police determined that the man used a pry bar to open the register and take the undisclosed amount cash. 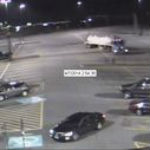 Police described the thief as a black man wearing a baseball cap, black or navy sweatshirt and khaki pants. He fled in a black Nissan Altima with a license plate on the front and back of the car.

Lincoln County detectives said the robbery was very similar to another that happened at a Walmart in the University area of Charlotte a few hours earlier.