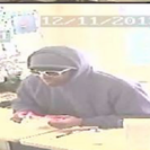 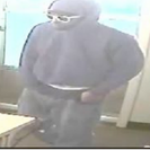 STATESVILLE, N.C. – Statesville Police are investigating the third bank robbery in the area in two days.

Around 3:20 Wednesday, Statesville Police responded to the Piedmont Credit Union in the 200 block of South Meeting Street.

Police say the suspect approached the counter, produced a Ziploc bag and demanded cash. When the teller complied, the suspect fled on foot, northbound towards Court Street.

The suspect, who has not yet been located, is described as being a black male, standing about 5-foot-10, weighing 180 pounds with a medium skin complexion. He was last seen wearing a dark-colored hoodie, blue jeans and shoes that “had red in them”, along with white sunglasses.

The suspect never produced a weapon, and no injuries were reported.

Video from the robbery is still being processed, officials say, and surveillance photos are expected to be released sometime Wednesday evening.

If you have any information, you’re asked to contact the Statesville Police Department.