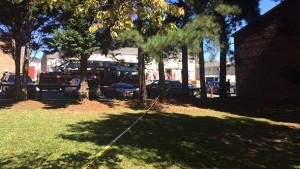 A man was shot and killed about 12:20 p.m. on Tuesday in north Charlotte.

The victim, whose name hasn’t been released, was found after police responded to the 1800 block of Griers Grove Road.

According to a witness nearby, the shooting occurred as children were being dropped off by the school bus.

No details on the incident have been released by police, but they are looking for suspects. They ask anyone with information on the shooting to speak with a Homicide Unit Detective by calling 704-432-TIPS or contacting Crime Stoppers at 704-334-1600 or their mobile app website.