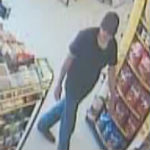 The suspect was taken into custody along Farm Pond Lane off Albemarle Road in east Charlotte.

Police in Charlotte and Matthews connected seven store robberies over the last couple of days.

The most recent occurred at Hancock Fabrics on Independence Boulevard in Matthews. Investigators said the assailant had a handgun and used a crowbar during the incident.

Police are calling the incident a larceny after they said the person reached over the counter and grabbed money.

While investigating this incident, police have determined the suspect may be connected to two other robberies in Matthews last week. The description of the robber was similar in all of the cases, police said.

Police in Charlotte said a robber they believed to be the same man who committed the crimes in Matthews also robbed three different stores in Charlotte.

Anyone with information on the robberies are urged to call Crime Stoppers at 704-335-1600.