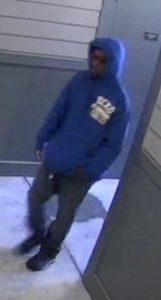 Police have released photos of the suspect of two sexual assaults at and near UNCC.

The first incident occurred last Sunday at 8:00 a.m. in the lobby of on campus housing on Darryl McCall Circle. The man approached a woman in the UNCC residence hall, and fondled her, grabbing both her buttocks and breasts before running away.

The second incident occurred at 4:00 p.m. that same day at the University Crossing apartment complex just across the street from campus. Police responded to the 8900 block of University City Boulevard after a 40-year-old victim said that a suspect had approached her in the parking garage, and fondled her before fleeing the scene.

Surveillance photos were obtained of the suspect, who is a black man in his 20s wearing a blue hooded sweatshirt and jeans.

Police have increased security on campus, and are asking anyone with information on the suspect to contact Crime Stoppers at 704-334-1600.