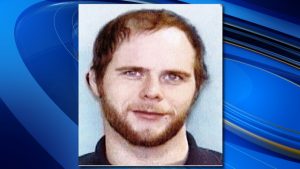 A man is still on the run after he took pictures of a child in a bathroom in Gaston County.

The incident took place at Harper Park during a little league baseball game on Saturday afternoon. A 10-year-old boy was in the bathroom at the park when the suspect took pictures of him from underneath a divider in the bathroom.

A woman called 911 to tell police that a man had just taken pictures of her nephew in the bathroom.

While the woman was still on the phone with police, the man fled the park. Parents tried to chase after him. According to reports, a coach attempted to stop the suspect and tried to smash through his window. The suspect sped away, however, running over the coach’s foot in the process and striking a parked car.

Parents at the game were able to get photos of both the suspect and his license plate. He was identified as Christopher David Hayes. He is now wanted for child pornography, simple assault, and other charges in connection to the incident. Police say that he is a resident of Lowell, and was seen driving a silver Kia Forte with NC license plates FCM-1371.

Police are asking anyone with information regarding the whereabouts of Hayes to contact 911 or Gaston County Communications at 704-866-3300.