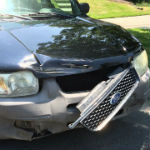 STATESVILLE, N.C. — Police are looking for a person they say was racing on a Statesville road and caused a crash that hurt two women.

Officers said they have tracked down a 22-year-old driver in the case, citing him for street racing. Kelly Parker was charged with willful speed competition.

Police said he crashed into a family as they left their home Sunday.

Police are still searching for that second driver.

If you have any information in regards to this case, you’re asked to call the Statesville Police Department at 704-878-3406.