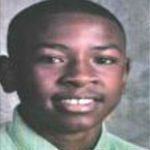 Kalvin Michael Charles, 16, of Lincolnton was last seen by relatives at his grandparent’s home at about 7 p.m. on Tuesday.

The teen became upset when his father told him they were moving to Tennessee at the end of the school year, according to a news release from the sheriff’s office.

Charles is a black male, 5 feet 5 inches tall and weighing about 130 pounds.

He has black hair and brown eyes.