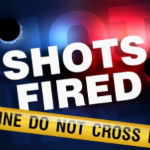 SHELBY, N.C. — A victim of a possible robbery was shot and killed in Shelby, police say.

The incident happened just after 2:30 a.m. Saturday on Holder Drive.

A man flagged down officers on nearby Broad Street and said the woman is his car was shot.

Police went to the scene on Holder, where they found the woman suffering from a single gunshot wound. She was later pronounced dead on scene.

Detectives believe this was part of a robbery, but the investigation is in its early stages.

The victim has not yet been identified.