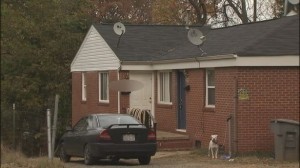 Tuesday night while her husband was beaten up outside. The victim, who has asked to not be identified, is six months pregnant. She had stepped outside to greet her husband when three men immediately attacked them.

Two men forced the woman inside, while the other man forced her husband to stay outside. The woman said once she was inside the men held a gun to her stomach and fondled her. While she attack was going on, she could hear her husband getting hit and kicked by the other man. The two men inside her home stole a television, money, and cellphones, loaded the things into a car, and sped away.

The female victim went to the doctor on Wednesday to get checked out and learned her baby is okay. Police do not have a specific description for any of the suspects.