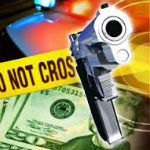 A Rock Hill police report says the 49-year-old man told officers he was on Rich Street about 1:30 a.m. walking toward his home on Saluda Street. One of the suspects allegedly placed a knife on the victim’s shoulder and said, “If you move, I will cut you.”

Three of the men had on all-black clothing and one had on a red coat, the police report states.

The victim told police he was robbed of $10 in cash, a gray Straight Talk cell phone, and a pack of cigarettes. He was reportedly knocked down to the ground but saw the men run down Rich Street towards Green Street. The report said he was not injured during the incident.