Rock Hill Mother Charged With Unlawful Conduct Towards Her Kids 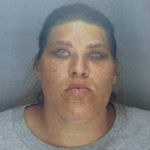 ROCK HILL, S.C. — Police said a Rock Hill woman and her children were living in squalid conditions in a house with no power, where they found animal and human feces.

Police said Misty Williford ran an extension cord from a neighbor’s house to hers to power a fan, refrigerator, a light and an Xbox.  It was above 90 degrees inside the home when the police were there.

According to an official on the scene, “There was animal feces throughout the entire apartment, there were piles of clothes, just dirty clothes in every room, and on top of the clothes were feces and urine”.

The police report described the smell as sickening.

Williford was charged with unlawful conduct toward three children, ages 11, 7 and 4.

The Department of Social Services is also involved in the case.