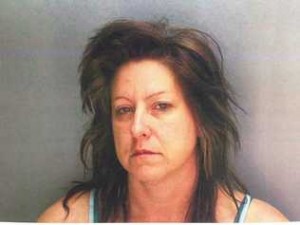 A Rock Hill woman has been arrested after she allegedly attacked a man she lives with then kicked and spit on police officers while resisting arrest.

Police received a call around 11 p.m. Friday to a house on Long Street. Upon arriving, they could hear yelling inside where they found a 54-year-old man bleeding at his mouth.

The man told police he had been attacked by Mindy Hendricks, 40, after she woke him up saying she “wanted to party” and the man told her he wanted to sleep, the police report said.

Hendricks smelled strongly of alcohol and told officers the man had attacked her, a police report said.

While trying to put Hendricks in the patrol vehicle and put a seatbelt on her, the police report says she kicked an officer in the eye and nose, yelled she wanted to go to the hospital, then hit her head against the inside of the car and spit.

Hendricks resisted in jail, kicking and spitting on an officer’s face while police tried to restrain her on a stretcher for medical assessment. She refused any medical help or attention.

Hendricks also told an officer that one of the other officers tried to arrest her because she was in a secret romantic relationship with him.

Hendricks has been charged with throwing bodily fluids on a law enforcement officer, criminal domestic violence, and resisting arrest. She is held on $50,000 bond at the York County Detention Center.

The officer Hendricks spit on and hit has been tested for blood-borne pathogens and treated for face soreness from the injury.