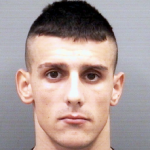 A Marine Recruiter in Salisbury has been arrested for sexually assaulting two female recruits.  Twenty-four year-old Sgt. Derek Percival is being charged with false imprisonment, sexual battery, and communicating threats, among other charges.

Authorities in Rowan County say Percival assaulted the young women both at the Arlington Street Marine Recruiting Office as well as at his apartment, located on Grandeur Drive. Complaints from the females let detective to open an investigation. Percival met both recruits through his job as a Marine recruiter. He is being jailed in Rowan County under a $100,000 bond. Authorities say they have notified the Marines of Percival’s arrest.