Santa Shot In The Back By Pellet Gun-Wielding, Unknown Shooter 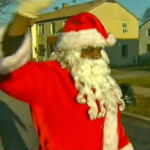 WASHINGTON, D.C. (AP) – The man dressed as Santa Claus and walking along Stevens Road in Southeast Washington saw three babies peering at him from a window, and he did what any Santa would do. Pumped with holiday cheer, he turned, waved and shouted the traditional festive greeting.

“Man, this is awesome,” Xavier Hawkins exclaimed on Christmas Eve morning, as he prepared to hand out presents to 800 needy children. “Oh, yes, Merry . . .”

But before the 50-year-old from Maryland’s Eastern Shore could say “Christmas,” a sharp pain cut through his upper back. The driver for the global moving firm Interstate, and Santa for seven consecutive years, had been hit with at least one blast from a pellet gun.

The wound was minor — a large welt — and Hawkins was quickly treated at a hospital and released. The shooting of Santa was captured by a television cameraman for WJLA (Channel 7), who was reporting a story on the 22nd annual gift event. 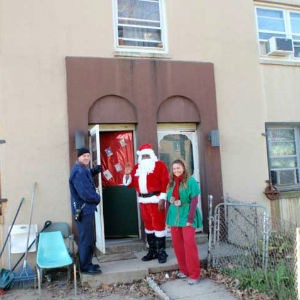 After he was shot, Hawkins buckled and briefly went to one knee before he stood up again. “Somebody shot me,” he said on the video. “Somebody shot me in the back. . . . I think somebody shot me with a pellet gun.” In an interview, Hawkins said he heard three or four more pops and was worried that others might be struck. “They’re shooting,” he shouted.

Santa being Santa, he had an entourage. Co-workers from Interstate, which sponsors the event, children and parents from the neighborhood, and several D.C. police officers, firefighters and paramedics rushed to help. Hawkins’s family was there, too — three daughters (11-year-old twins and a 16-year-old), a nephew and a 10-year-old grandson.

Interstate sponsors the event to recall its roots — the company was founded in Barry Farm in 1943. Although it moved its headquarters to Springfield, Va., in 1971, workers continue to help the struggling District neighborhood south of Anacostia, which is beset by crime and economic hardship.

“I think it was a juvenile doing a juvenile type of thing,” said Bud Morrissette, president of Interstate and the third generation to lead the company. D.C. police said they had not made any arrests but suspect that the pellet gun was fired from a line of apartment buildings flanking Stevens Road.

Morrissette said thousands of gifts collected by the Marine Corps through its Toys for Tots program, wrapped by his employees and selected for about 800 children, were ready to be distributed Christmas Eve.

Hawkins had just started out and not yet handed out a single gift when he was shot. Only the paramedics, who insisted that he go to the hospital, prevented him from continuing.

Morrissette said another employee, one dressed as the Grinch, put aside any differences and helped hand out presents. But not before he was grilled by one of the District’s finest. “One of the first things the officer did was question the Grinch,” Morrissette joked. “He told the officer he didn’t have anything to do with this.”

Morrissette, who was at the event, said there is no doubt that he and his workers will be back. And so will Hawkins.

Right after getting cleared by the hospital, Hawkins returned to Barry Farm, where co-workers were giving out the last of the gifts. He said residents poured from their homes to hug him and wish him well. “They all asked me the same question: ‘Santa, are you coming back next year?’ I told them, ‘Sure I am, God willing.’ ”

Hawkins said he stood in the middle of Stevens Road and shouted, “Merry Christmas!”

Finally, he said, “I was able to get it out the way I wanted to.”