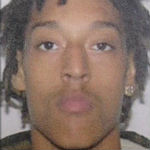 On Sunday around 3:20 p.m., officers came upon a wreck at the intersection of S. Market Street and Chesterfield Avenue.

The driver of one of the vehicles involved was Tyzhe Lashown Hough, 19. During the course of the investigation, Hartley ordered Hough out of the vehicle due to the fact that officers said there was a strong odor of marijuana coming from inside the vehicle.

Hough acknowledged Hartley’s commands but refused to get out. Hough then placed the vehicle in drive and hit the accelerator, fleeing the scene, according to officials.

Hartley was able to get back in his police car and give chase. Hough fled out of the city limits on S.C 903, eventually losing control of his vehicle and crashing on Beacon Road. Hough then fled the second crash site on foot, running into the wood line.

Hartley’s injuries prevented him from chasing Hough. The Lancaster County Sheriff’s Office set up a perimeter and deployed a tracking team as well as a SLED helicopter in an attempt to locate Hough, but was not able to find him.

The officers were taken to the Springs Memorial Hospital emergency room where they were treated for their injuries. They were both later released with significant, but non-life-threatening injuries.

Hough is currently wanted for attempted murder, with several other charges pending. Anyone who has any information concerning his whereabouts is asked to contact: Lancaster Police Department at (803) 283-1173 or the Anonymous Tip Line at (803) 289-6040.