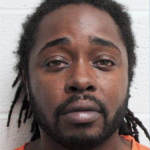 CABARRUS COUNTY, N.C. – The Cabarrus County Sheriff’s Office is looking for a sex offender who failed to register his home address following a move.

Wallace is registered sex offender in Cabarrus County, but his conviction from a case in New Jersey, officials say.

Wallace is accused of failing to notify the Sheriff’s Office of his new address after moving from State Avenue in Kannapolis.

Wallace is described as standing 5-foot-5 and weighing about 170 pounds.