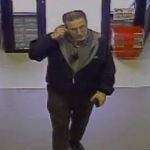 IREDELL COUNTY, N.C. – The Iredell County Sheriff’s Office is asking for the public’s help in identifying a suspect believed to be responsible for several open cases.

The Sheriff’s Office says the suspect was captured on surveillance in a December 6 larceny of a business on Brawley School Road, in which a few items were taken, the value of which authorities say is small.

Authorities shared the suspect’s photo in this case, as they believe he’s a suspect in other cases, and his identity would help them close cases.

The suspect left the scene of the Brawley School Road business break-in in a black SUV; the make and model is not known.

If you have any information or can identify the suspect, please call the Iredell County Sheriff’s Office at (704) 878-3180.