Shooting At Southpark Mall: No Injuries, One Arrest 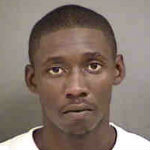 CHARLOTTE, N.C. — A man is facing charges for a shooting in Southpark on Friday night.

Police arrested Pierre Lewis and charged him with discharging a firearm and assault.

Overnight, investigators responded to a crash on Sharon Road following the shooting.

Police said Lewis threatened a man by firing shots into the air then chased him down in his car.

They both crashed at an intersection, but no one was seriously injured.