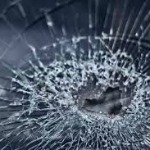 Emergency crews were called to a crash scene in the 3500 block of Kelly Road around 2:15 Sunday afternoon.

Police say speed is a factor in the crash, and says they won’t know if alcohol contributed until test results are returned.