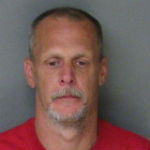 BELMONT, N.C. – Police in Belmont say a gunman who was holed up inside a CVS Pharmacy has come out and surrendered to investigators.

Edward Scott Russ, 46, of Gastonia, took the three employees inside the store hostage.

The incident began around 2 a.m. at the CVS Pharmacy on the 6700 block of Wilkinson Boulevard, according to Belmont police.

Police say Russ walked into the store with a SKS scope mounted rifle in an attempt to commit an armed robbery.

Two officers arrived on scene and the gunman opened fire.  The officers were able to back away without being injured.

10 agencies were on the scene with SWAT teams and negotiators and were talking to the man on the phone.

The three employees who were being held as hostages were released by Russ around 6 a.m.

Investigators monitored Russ using the live surveillance footage from the pharmacy cameras inside the drug store.

A two block radius around the store was cordoned off by police during the standoff.

CVS Pharmacy released a statement in response to the incident:

“We are pleased to confirm that none of our employees were harmed during the incident in Belmont and we want to thank law enforcement in Charlotte and Belmont for their quick response and resolution.

Regarding the specifics of what occurred, as this is an on-going police investigation we are deferring to them for any comment.

We will re-open our Belmont store as quickly as possible. In the meantime, Belmont customers with prescription needs can visit our nearby store at 3440 Wilkinson Blvd. in Charlotte.”