Student Jailed After Spitting At Officers 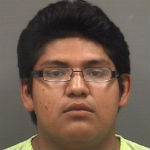 SALISBURY, N.C. – A Salisbury High student was jailed by police for what he did during a fire drill at the school on Wednesday.

According to the report, Diego Santamaria, 16, stole another student’s cell phone.  When confronted about the theft, Santamaria denied it.

Santamaria was charged with larceny and malicious conduct.  He was jailed under $2500 bond.