Stupid Crime of the Week: Man in Colorado Wanted for Moose Harassment 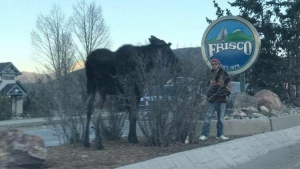 A man is wanted after he was seen harassing a moose in Frisco, Colorado.

Authorities in Colorado say that harassing or even feeding wildlife is against the law. One man disregarded these laws on Friday when he chased and taunted a wild moose. Witnesses saw the man chase the moose across the road and into the median right in front of a sign bearing the town’s name.

Someone passing by in a vehicle took a picture of the man as he stood in front of the animal. Experts with the Colorado Parks and Wildlife say that the moose is clearly agitated in the photo, with ears back and hackles raised.

Members of the CPW say that several people are injured each year after coming into close contact with a moose. These animals can be very aggressive if provoked, and the man was putting himself in a great deal of danger.

CPW is eager to find the man to try to help him understand how dangerous his situation was. Officials also say that he may be subject to citations for harassing wildlife if found.

Moose will not attack people if left to their own devices, but it is the CPW’s policy to euthanize any moose that injure humans to prevent further injuries making incidents such as this one a serious concern.