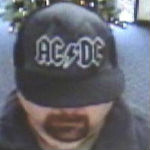 HIDDENITE, N.C. – The Alexander County Sheriff’s Office is searching for a man accused of robbing a bank on Tuesday morning.

According to investigators, the People’s Bank of Hiddenite was robbed around 10:30 a.m. on Tuesday morning.

Deputies say the robber ran from the bank on foot and may be driving a burgundy Dodge truck that left traveling Old Mountain Road.

The suspect is described as a white male, medium to heavy build, with a brown goatee. He was last seen wearing a dark-colored or black jacket, black hat with “AC/DC” on the front, and blue jeans. 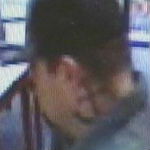 He also has a tattoo that appears to be an anchor on the left side of his neck.