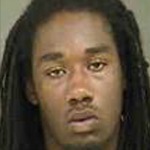 Charlotte-Mecklenburg police have charged Kwame Crawford with attempted murder, assault with a deadly weapon with intent to kill inflicting serious injury and possession of a firearm by a convicted felon.

Police responded to the shooting just after 5 p.m. Sunday on Lakewood Avenue.

The male victim was shot in the chest and rushed to Carolinas Medical Center with serious injuries. His name has not been released.

Police believe Crawford and the victim know each other.