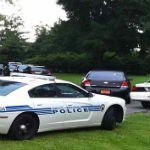 CHARLOTTE, N.C. – A suspect is dead after a standoff and shooting with Charlotte-Mecklenburg police in the University Area early Saturday morning.

CMPD says they responded to the 2500 block of Penninger Circle around 1:15 a.m. for an assault with deadly weapon call. When they arrived, the man who called police told them he and his father got into an argument, and his father shot at him but missed.

Police say the suspect, Lemuel Rufus Furr, barricaded himself in the house and refused to come outside.  when he finally left the residence, he came out pointing two handguns at police.  They shot him, and he was pronounced dead at the scene.

Detectives are conducting an investigation to determine whether all CMPD procedures and policies were followed during the incident.