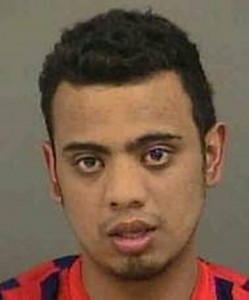 The suspect in the hit-and-run that killed a moped driver on Wednesday in the 3000 block of South Boulevard has been identified by police.

Elmer Galeas-Padilla, 23, was identified Thursday and is charged with driving while license is revoked and felony hit and run.

Galeas-Padilla was driving a black 2005 Nissan Murano when he struck Jefferson Davis James, 56, after failing to yield to James’s moped when turning left onto New Bern Station Court, according to CMPD Detective J.B. Reibold. James’s moped wrecked into the area near the rear passenger door of Galeas-Padilla’s car.

James was taken to Carolinas Medical Center, where he was pronounced dead.

Charlene Simard, 50, was a passenger on the moped. She suffered injuries that were non-life-threatening, according to Reibold.

Galeas-Padilla had been traveling northbound when he made the left turn. After hitting James, he fled southbound on South Boulevard, Reibold said.

The Murano’s license plate read DMP8296 and is of Texas. It also has tinted rear windows and chrome door handles, plus damage near the rear passenger-side door from where James’s moped hit it, Reibold said.

Galeas-Padilla had been under monitoring from the U.S. Immigration Office, but he cut off the electronic monitoring ankle bracelet on Wednesday, police said. The man was seen last close to Arrowood Road and Interstate 485, according to police.