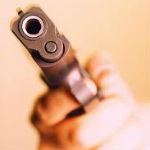 A man has been arrested and charged for being involved in a shooting incident early Monday morning.

Jaquan Carter, 34, was charged by detectives with CMPD’s North Division.

At around 10:30 a.m., officers responded to a call about shots being fired in the 5400 block of Statesville Road.

When they arrived, they were informed that two people had gotten into an argument when one person took out a firearm and started shooting. Several unoccupied parked vehicles were struck. The shooting suspect then quickly fled from the scene.

Soon after, officers received another call about assault with a deadly weapon at the 4100 block of Statesville Road. They were able to determine that the suspect was involved from earlier. The shooter had gotten into a car accident, left the vehicle, and started shooting his gun before fleeing on foot to behind a business.

The suspect’s vehicle had been left in gear and rolled into a ditch. There were no injuries during the shootings or the vehicle accident.

Police and a K-9 Unit located the suspect in a wooded area but a firearm was not recovered.

Detectives and officers were able to identify Carter as the suspect based on evidence and additional information. He was arrested Monday afternoon without further incident and was charged with firearm by felon and assault with a deadly weapon with intent to kill.

Carter is currently in custody of the Mecklenburg County Sheriff’s Office. He may face additional charges.

Police ask anyone with information on the case to contact Crime Stoppers: 704-334-1600.