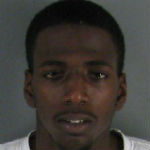 Taikeem Littlejohn, 18, faces a murder charge in the murder of Brandon McCall.

Police say Littlejohn tried to rob McCall before he shot him.

McCall drove a short distance before crashing on West Garrison Boulevard Saturday, where he died.

There were two vigils held for McCall Tuesday night.

He was set to graduate in the spring.

Littlejohn is also charged with robbery with a dangerous weapon in connection to a separate crime that happened in October in Cleveland County.

His court appearance for that charge will take place Friday.

On Tuesday evening, there was a growing memorial where McCall crashed after being shot Saturday night on West Garrison Boulevard.