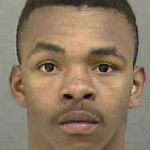 CHARLOTTE, N.C. — Charlotte-Mecklenburg police have arrested a teenager in the murder of a woman who died at the hospital after being shot in west Charlotte Monday evening.

Police said that 35-year-old Felicia Clinkscale’s boyfriend drove her to Presbyterian Hospital after she was shot inside a car on Columbus Circle around 7 p.m.

Detectives believe Clinkscale knew Sloan and had been arguing with him inside a vehicle moments before the shooting.

Anyone with information about this incident is asked to call 704-432-TIPS.