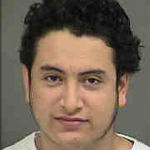 CHARLOTTE, N.C. – A Charlotte teen entered a not guilty plea on Thursday to all charges against him stemming from a hit and run wreck that killed a woman and a toddler.

Uriel Flores, 18, is charged with involuntary manslaughter and felony hit and run in connection with a deadly south Charlotte accident in mid-September.

The crash initially killed one teenager, 19-year-old Shaquise Sharvelle Bush, who was pronounced deceased at the scene. About a week later, a 3-year-old died from injuries he sustained in the crash. Three others, all children, were hospitalized in the wreck that occurred around 6 in the evening in the 2100 block of Sharon Road West.

Police say Flores and Bush were racing at speeds up to 70 mph when Bush lost control of her 2002 Mercury Sable and struck a utility pole near the intersection of Hopeton Road.

Flores called 911 to report the crash, authorities say, but did not stop at the scene of the crash.

Flores rejected a plea deal from the Mecklenburg County District Attorney’s Office that would have allowed him to serve 120 days in jail for two counts of misdemeanor death by vehicle.

The trial date is set for next year.