Teen Shot By CMPD Officer After Refuses to Drop Gun 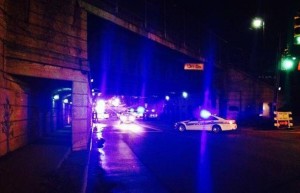 A teen who refused a Charlotte-Mecklenburg officer’s commands to drop a gun was shot by the officer Saturday night, according to Police Chief Rodney Monroe.

The teen, 14 or 15 years old, was hit in one leg and his wrists from the three or four shots fired by the police officer, according to Monroe at a news conference.

Medic said it took the teen with potentially life-threatening wounds to Carolinas Medical Center. He is expected to recover from the injuries, Monroe said in the conference.

Monroe said the teen was in a 10- to 15-people group having a party near the 1200 block of North Tryon Street.

Officers had been responding to a 911 service call at 8:30 p.m. referencing a large teen party in the 900 block of North Tryon, according to a police news release following Monroe’s conference.

According to police, the person calling said several male teens there were using their clothing to try and hide guns. The teens fled when the officers arrived.

Responding officers noticed the teen with a gun and told him to drop it, police said.

The teen refused to drop the weapon, then Officer Paul Quinichett shot at the teen.

The Internal Affairs Bureau with CMPD will investigate whether procedures and policies of CMPD were followed during the incident. This is standard procedure for any shooting involving an officer.

Quinichett is currently on administrative leave until the investigation is completed, which is also standard protocol.

No one else was injured in the shooting that evening.