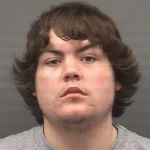 ROWAN COUNTY, N.C. -A teenager accused of trafficking heroin is being sought by deputies for missing a court date earlier this month.

Brandon Lee Rumple, 19, was charged with possession of over 200 grams of heroin seized during the search of an apartment in Charlotte in April 2012. He was slated to appear in a Cabarrus County Court during first week of March, but failed to appear.

Rumple is no stranger to the law, with multiple other cases pending in Rowan County.

In the most recent incident in October 2013, Rumple was found with a balloon of drugs hidden in his rectum during a strip search at the Rowan County Detention Center. Rumple had his probation revoked after the incident.

Rumple was charged with possession with intent to distribute Soboxone and possession of controlled substances in a local confinement facility, both felonies.

Back in June 2013, Rumple was involved in a dispute at his residence, in which he allegedly fired a .380 handgun at two individuals.  The handgun and shell casings were recovered at the scene.

Rumple was charged with felony possession of a firearm.  The Rowan County Sheriff’s Office Special Response Team forced entry into Rumple’s residence on July 2, 2013, and arrested him on that charge.

Rumple was also charged in an incident on October 1, 2012, when he was arrested at the Rowan Recycling Center at 1455 Julian Road in Salisbury, North Carolina, while working community service.

In that incident, Rumple attempted to discard 6.7 grams of heroin in a Porta-Jon at the facility after deputies received a report of a drug sale involving someone matching Rumple’s description at the location.  An additional 3.7 grams of Methadone and $415 in United States currency were found in Rumple’s possession.  Rumple was charged with trafficking heroin.

Rumple was convicted on January 20, 2012, in Cabarrus County Superior Court of delivery of a Schedule I controlled substance.