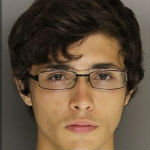 LANCASTER COUNTY, S.C.  — According to a release from the Lancaster County Sheriff’s Office, a 19-year-old plotting to commit a kidnapping and murder was arrested Sunday.

Authorities received information that Joseph Ray Hegler had been planning to kill another man for several weeks. The suspect planned to kidnap and kill the victim on Sunday night. The release said Hegler was apparently angry with the man over the victim’s relationship with a female.

During the investigation, authorities conducted a traffic stop on a vehicle operated by Hegler. The suspect was found to be wearing rubber gloves and armed with a number of weapons.

Investigators found numerous items in the vehicle that substantiated the report, including gloves, duct tape, handcuffs, a flashlight, a skinning knife set, change of clothes, trash bags, bleach, gasoline and an ax.

“We are extremely fortunate that someone came forward with the information needed to get this investigation started,” said Sheriff Barry Faile. “We are thankful that we were able to bring this investigation to a conclusion so quickly before Hegler was able to hurt someone.”

Hegler is jailed at the Lancaster County Detention Center awaiting a bond hearing. He has been charged with attempted murder and attempted kidnapping.