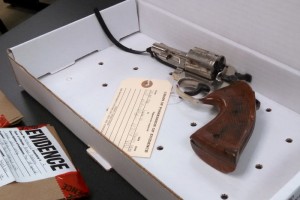 Authorities in Salisbury are on the lookout for the man who robbed an internet cafe on Thursday evening.

Shortly before 10:00 Thursday night, an armed man entered the South Main Internet Cafe. He brandished a revolver and demanded that everyone in the building get on the ground except for the teller, who he ordered to give him money from the register.

Because he had not brought a back for the money, the robber sat his gun down on the counter while he put the cash into his coat. When the teller realized that the man had set the gun on the counter, she picked up the gun and fired it, attempting to shoot the robber. The shot missed, but the robber promptly left the cafe on foot with nearly $700 cash.

Local authorities are still trying to locate the man and determine if he is also responsible for the robbery which took place that same day at Park Sterling Bank. If you have any information on this crime, please contact Salisbury police at (704) 638-5333.