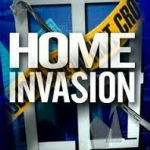 GASTON COUNTY, N.C. —Three people are in jail Wednesday morning after police say they burst into a man’s home, attacked him and led officers on a chase.

Police say they got a call around 9:30 p.m. Tuesday from a man who lives on King Arthur Drive in the Kings Grant subdivision.

He told officers he heard a knock on the door.

When he answered, three people wearing masks barged in with a gun, tied him up, and robbed him.

When the suspects left, the man was able to call police.

The police then spotted a suspicious car and tried to pull the driver over.  The car took off—eventually crashing on Lowell-Bethesda Road where police were able to arrest them.

Police found part of a gun on the road that they said suspects threw out of the car.

Those charged are Eric Jerome Sykes, 25, of Mount Holly, Erica R. Grice, 20, of Charlotte, and Johnny Jederrian Nichols, 23, of Stanley. They were all booked into Gaston County Jail on bonds ranging from $1 million to $500,000.