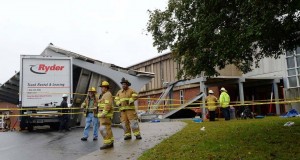 A rental truck driver has been charged with an unsafe movement violation after he hit a roof support beam last Saturday at North Iredell High School and caused concrete to fall on students.

The driver was 64-year-old Douglas Reedy Souther of Mooresville.

The students had been going into the school’s entrance for a regional band competition at North Iredell High when the incident caused an awning to collapse.

The high school is 52 miles to the north of Charlotte.

Within five days, students at the high school raised $31,650 for the families of band members who were hurt during the incident.

There were eighteen band members hospitalized from the wreck, including some with broken legs, feet, pelvises, and severe head injuries, plus one girl who had to have her leg amputated, according to drum major Julia Moore.

The students want to raise $50,000 for covering costs for hotel rooms, gas, food, and lost salaries of the injured students’ families. The money will also go towards a prosthetic and home changes for the girl who had the amputation, Moore said.

Additional money will go towards a new band trailer, according to Moore.

Souther will have to appear in Iredell County Traffic Court on Nov. 25. The charge against him carries a court cost of $213 and a fine.