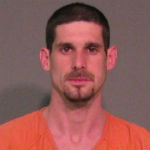 CLOVER, S.C. – Two men were arrested in Clover after they were caught walking down the street with a stolen flat-screen television, according to a report from the Clover Police Department.

Around 1 a.m. on February 22, officers saw 34-year-old Joshua Stewart and 35-year-old Anthony Howe carrying a large Toshiba television, with a wall-mount still attached to it, across Highway 321 from Walnut Street towards Smith Street.

The men told the officers that the tv belonged to Howe and that they were carrying from a home he was moving out of. Police went to the home where the tv supposedly came from, but everyone there said that, although they did know Howe, a tv that size had never been in the home.

Police, suspecting the pair had been drinking, performed a sobriety test and subsequently took them to the Clover Police Department for public disorderly conduct.

Around 7 a.m. that same morning, police got a call about a burglary at a home on Hampshire Street, which is off of Walnut Street.

The victim told police that when he came home from work, he found that a bathroom window had been busted out, and that his Toshiba tv, valued at about $1,500, had been stolen, along with the wall-mount attached to it.

Stewart and Howe were then served warrants for first degree burglary, larceny, and criminal conspiracy.

Police said Howe later told them that he and Stewart had broken into the home on Hampshire Street around 5:30 p.m., hid the tv behind an abandoned home nearby, and then went back to get it that night.