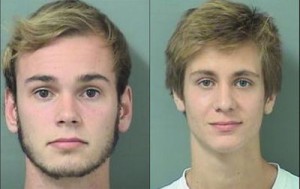 According to a probable-cause affidavit made public Wednesday, Alexander Fyfe and Grant Sullivan, the accused teens, got caught on tape at Hands-On Learning Center, a preschool on Okeechobee Boulevard, both times they committed the crime.

The first school bus break in was at about 9:30 p.m. on Dec. 10. The teens forced open the bus’ driver’s window and took the $100 extinguisher, then emptied all of its contents and tossed it aside.

Sullivan, who has the tattoo, confessed they did it to “let off steam” because the other teen was upset about turning 18, the affidavit said.

The second occurrence was at about 8:30 p.m. Dec. 22, when they forced another bus’ main doors open. Sullivan squeezed in and took another extinguisher, police said.

An officer, who arrived at the preschool the next afternoon to review the security camera’s footage, reported he remembered seeing on his way someone who looked like one of the thieves.  The person he saw was wearing the same black wrist guard on his left hand: Fyfe, it turned out.

Police showed the video to Fyfe’s parents at their house, and they confirmed it was their son on camera. Fyfe told sheriff’s officers that Sullivan, who lived a few doors down, was the other guy in the video. Sullivan and his father came to the police station and Sullivan confessed to his part in the crime, police said.

Fyfe and Sullivan have been charged with burglary, grand theft and criminal mischief. Fyfe was released on his own recognizance and Sullivan after posting $12,000 bail.

Fyfe reportedly asked if getting arrested for felonies would affect his chances of getting into the U.S. Coast Guard.