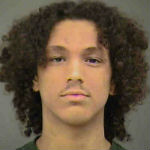 Robinson was found with the gun around 8:55 a.m. Tuesday morning. Sources said the gun was loaded and he had extra ammunition.

Principal Melissa Dunlap sent out a ConnectEd message to parents on Tuesday saying, “I want to let you know that a student brought a weapon on campus this morning.  No one was injured or threatened, but this is against the law and school policy.”

Robinson was picked up at school when officers came to arrest him for a simple larceny case in Cabarrus county and he was a suspect to a breaking and entering that happened in Mecklenburg County. The loaded gun was found in his bookbag.

Charlotte-Mecklenburg School police officers are involved in the investigation.

He is being held in the Mecklenburg County Jail under a $5,305 bond.

CMS officials are now using this incident as reminder for parents to tell their children what not to bring to school.