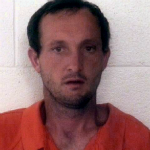 LENOIR, N.C. – Caldwell County authorities have arrested a suspect in connection with a suspicious death.

Crime In Charlotte .com reported this morning about a man’s body that was found outside of a home on Flintstone Court in Lenoir around 6 a.m. Thursday.

Investigators told us the body was discovered by the homeowner.  It was badly injured, suffering multiple traumas to the upper torso.  The trauma was so severe that the victim’s mother had a hard time identifying her son.

The sheriff’s office identified the victim as 34-year-old Raoul Anton Dula of Lenoir.  No official word yet on how he died.  Mr. Dula was the father of 2 young sons.

Investigators said Friday they arrested Earl Franklin Moore Jr. and booked him into Caldwell County Detention Center with no bond.

Anyone with information is asked to call the Caldwell County Sheriff’s Department at (828) 754-1518.  This is a developing story.  Crime In Charlotte .com will update you as the investigation unfolds.