Woman Arrested After Driving Drunk To Steal Panties From Walmart 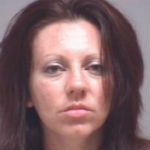 LINCOLN COUNTY, N.C. – A Stanley woman was arrested after driving impaired to Wal-Mart and stealing panties, according to the Lincoln County Sheriff’s Office.

Andrea Dawn Black, 28, drove to Wal-Mart on N.C. 73 in eastern Lincoln County before 1 a.m. Monday, according to reports.

Deputies responded to a call about a suspicious vehicle in the store parking lot and approached a sport utility vehicle.  When they arrived on the scene they found a man passed out in the front passenger seat and a baby crying in the backseat.

According to a spokesman with the Sheriff’s Office, deputies knocked repeatedly on the car window but the man wouldn’t wake up.  They finally opened the door and woke him.

The man told officers that Black was driving the car and had gone inside the store.

Deputies had Wal-Mart employees page Black. When Black came to the car, deputies determined that she was impaired.

When searching the woman’s purse, deputies reported finding a pair of black panties with the tag still on them. A Wal-Mart employee said that the undergarment was from the store.

Black was charged with driving while impaired, no operator’s license, misdemeanor child abuse and misdemeanor larceny.

The 11-month-old child wasn’t injured, and the passenger was not charged.