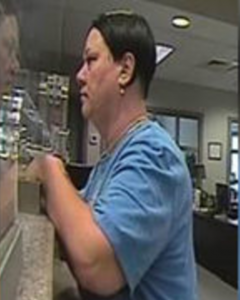 Police have tracked down and arrested the woman accused of robbing a Charlotte bank on Monday.

The incident took place at 4:00 p.m. at the BB&T on Sardis Road North in southeast Charlotte. According to workers, a woman with short hair and a light blue t-shirt approached the counter and handed one of the bank employees a note that demanded money.

Employees handed the money over, and the woman fled the scene.

Police were able to view surveillance footage and released the pictures in the hopes that she would be recognized.

The suspect was later seen at a Jack in the Box on North Tyron Street in University City, and was subsequently arrested.

Police identified the suspect as Shelly DeAnne McClure, and she has been charged with the incident.