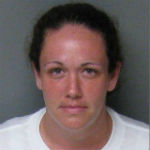 SHELBY, N.C. – A woman was arrested after stealing more than $300 worth of items from Dollar General and CVS in Shelby, according to warrants.

Carolyn Renee Jordan, 35, of Gastonia, was charged with misdemeanor larceny and two counts of possession of stolen goods.

According to arrest warrants, on Tuesday Ms. Jordan stole $98 worth of items from the CVS Pharmacy on Grover Street, including four packs of batteries and two packs of Breathe Right Strips.

On the same day, she also went to the Dollar General Store on Fallston Road and took padlocks, Goody’s pain relievers, hair products, Fixodent, ear buds, Prilosec, Tylenol, and Glade deodorizer worth $276, according to the warrant.

Jordan is being held at the Cleveland County Detention Center with a $1,500 bond.