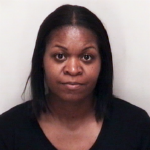 SALISBURY, N.C. – Police in Salisbury say a woman fired multiple shots at her estranged husband as he packed up and prepared to move from the home they shared.

Around 3 p.m., police were called to the hospital after 45-year-old Kenneth Wayne Miller was brought in by private vehicle with several gunshot wounds.

According to authorities, Kenneth had been at packing up, preparing to move from home he shared with Jada, his estranged wife, when she began firing shots at him, hitting him in the hand and torso.

Kenneth fled the apartment ad was able to drive himself part of the way to the hospital, when he pulled over and phoned a friend to drive him the rest of the way.

Once he arrived at Novant Rowan Medical Center, he was stabilized and taken to an undisclosed hospital, where he is listed as stable.

Jada turned herself in to the Salisbury Police Department around 11 Sunday night. She’s charged with assault with a deadly weapon inflicting serious bodily injury with intent to kill.

Due to the domestic nature of the crime, Jada is held in the Rowan County Detention Center without bond.