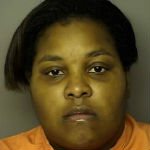 CONWAY, S.C. (WMBF) – A mother is accused of leaving her kids home alone while she was in jail. No one knew the kids were there without an adult or electricity.

According to court records, Robin Kearns was originally arrested on October 14 for fraudulent check charges.

No one knew she went to jail until the next day; her sister got online and found her sister was behind bars, according to a police report.

The report shows while Kearns was in jail she left her three young children home alone without finding an adult to watch them while she was jailed.

Neighbors don’t believe she meant any harm. They think she went in to settle her debt, not realizing she would be gone from home for days.

“People make mistakes. But when you try to correct it, that should override a lot of stuff. That should show you’re not really a bad person,” said Rudy Toomer, a neighbor to Robin Kearns.

Neighbors up and down the street say Robin Kearns kept to herself. They note her kids always seemed well-mannered, going to school and playing in the yard.

“I’ve never seen them arguing or fighting or anything,” said Toomer.

Since she was usually inside, neighbors didn’t notice Kearns was gone and the kids were inside the home alone.

According to the police report, when she was arrested on the 14th, Kearns left a note for her oldest son, a 14-year-old. It said to take care of the other children, an 11-year-old and a 6-year-old.

The note reportedly said not to tell any family members what was going on.

There is also no power at the home, the report writes, someone taught the 14 year old how to illegally hook up the power during the night and then disconnect it in the morning.

Mr. Toomer believes Kearns fell on some bad luck and didn’t meant to harm her children.

“Instead of giving her a hard time, I think someone should try to help her. Straighten it out and get her back home to taking care of her children,” he said.

While Robin Kearns remains in jail, her children are with her sister, the report states, in a safe environment while DSS and Conway Police continue investigating the incident.