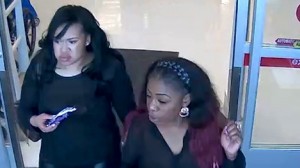 Gastonia Police are hoping someone will come forward with information regarding the two women pictured. The two women are suspects in a fraud case.

According to police, a fifty year old man from Roanoke Rapids reported that someone used his Master Card debit card number in late March to make purchases a Sam’s Club and Toys-R-Us in Gastonia.

Surveillance cameras at both stores were able to capture the two suspects on video. Both are black females with long black hair and were wearing black clothes. One woman had silver shoes and the other had a silver purse.