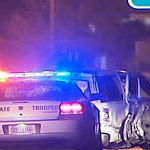 CHARLOTTE, N.C. – The Highway Patrol is investigating two accidents they say were possibly caused by the same wrong way driver.

According to the Highway Patrol, a car was traveling southbound in the northbound lanes of Interstate 77 early Saturday morning when it collided with a vehicle near exit 9 for John Belk Freeway. The wrong way driver then hit another vehicle near exit 8 for Remount Road.

Alcohol is believed to have been a factor in the accident.

MEDIC confirms that two patients were taken to the hospital, one non-emergency and the other with more serious injuries.

All northbound lanes of Interstate 77 were shut down while the scene was being cleared.